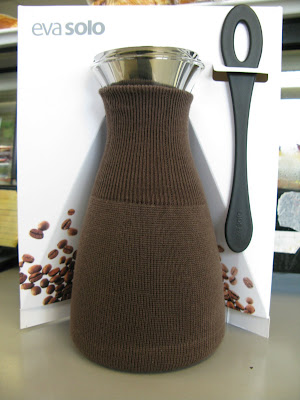 For a long time now I'd been hearing about the Eva Solo brewer from Europe. That fancy dandy coffee brewer that so many people think is terrific that I finally decided to head over to my local housewares shop and buy one to test. Over I went, and in a flash of credit card insanity, bought one brown knit-clad Eva Solo.

Imagine my surprise and shock when told that the cost (plus 6% Maryland Sales Tax *bastards*) would be $106.59!!! Christ Almighty - that's an expensive coffee brewer.

My feeling turned worse as I reviewed the instructions and realized that you pour hot water over coffee in the thing, let steep for four minutes and then pour. The coffee is restrained by a mesh screen filter. Are you serious? I started wondering, Did I really just pay a hundred bucks for a glorified French press???

If it hadn't cost me over a hundred bucks, I might have thrown it out the window of my GMC Sonoma for good measure.

Back at The Spro, it was time to put the Eva Solo to the test. I admit, I was very skeptical. Four minute immersion in water and strained by a metal mesh? Sounds a lot like French Press to me - and a press only costs $30. 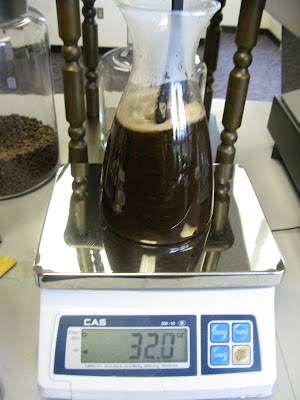 First off, the design. It's certainly a good-looking coffee brewer. Sculpted glass with nice curves and a matching metal cap/filter, dressed in a smart-looking knit sweater. Sadly, it's attractive looks also translate into its' most infuriating problems. That knit sweater keeps the glass insulated but since it's fitted, it's an absolute pain in the ass to remove for cleaning - either the knit sweater or the glass jug. Pull, pull, prod, twist, curse and the sweater finally comes off. The sweater is fitted like an American Apparel t-shirt which means that with repeated removals, the sweater will deform and look ugly.

I'm sure there's some design reason for the contoured glass that somehow affects the flavor but, to my mind, it's only reason for being is to make it absolutely impossible to properly clean the glass without a specialized brush (more money). This means that there's a continual buildup of residue and oils that will dry out and turn rancid over time. To this day, the stupid thing is sitting on the counter awaiting the arrival of the Evil Solo Brush that I ordered from Brushmasters.

The true barometer for any brewing device is what's in the cup. Admittedly, because of my reaction to the cost, I had very low expectations for the thing. A glorified, one hundred dollar french press has about as much cache with me as that Clover Automated Brewing System so many of these "third wave" baristas lust over.

For our initial test, I decided that I would give the Eva Solo a run using the same parameters we use for French Press service at The Spro: 23 grams of coffee to 32 ounces of water for a total volume of 896 ml. On our Mahlkonig Kenya, we used a "5" grind setting and brewed for a total of four minutes.

Our control for the test would be the actual coffee from that days' French press service, the El Porvenir coffee from Colombia's Monte y Colinas estate, roasted by Origins Organic Coffee in Vancouver.

The brew from the Eva Solo compared to the standard press as light, airy and clean, with a "friendly" character and a light bitterness that was "pleasant." Hmmm, not bad. 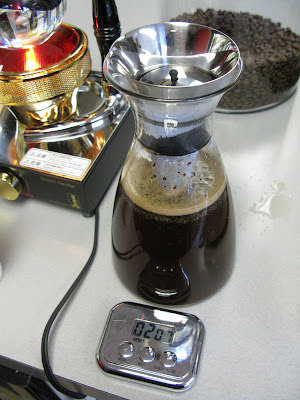 Next test was the actual recommendations from Eva Solo. Using 50 grams of coffee ground to a "normal" grind of "4" on the Mahlkonig Kenya, we filled the Eva Solo to its' capacity of one liter, stirred for ten seconds and allowed to steep for four minutes. The results were surprisingly light, bright and, as one barista noted, a very "dessert-like" coffee.

I was expecting the worst. I was hoping for the worst. Because of its' cost, I didn't want to like this brewer. In fact, I was hoping the results would bear out a brewer best to discard as rubbish, but I can't. In fact, I was surprised and shocked that the Eva Solo produced such a distinct difference than the French press control. Whether brewed to our standards or the company recommendations, the brew was crisper, lighter and cleaner-tasting than the French press. It made some delicious coffee.

That said, is the Eva Solo worth the cost? I don't know. It produces a tasty good cup of coffee with very little fuss or muss (certainly much simpler than a vac pot, but equally as messy as a press), just add hot water to coffee, stir ten seconds, wait four minutes, then pour. It's simple and easy to use, but it's an absolute bitch to clean - which earns low marks in my book. Then there's the cost. At a hundred dollars, it's not cheap. Even at half that price it would be a hard sell. But at $30 each, I would buy six of them and offer them for service - because they're glass, they will break and you will need to replace them (especially for commercial service). 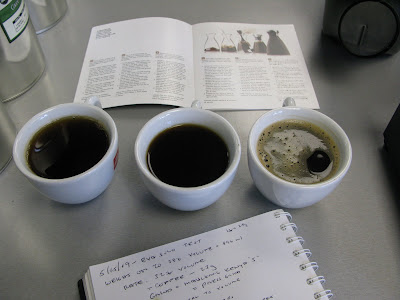 To be honest, it's the cleaning part that kills it. It's very difficult to clean and since all the Eva Solo models are clad in either a knit sweater or neoprene jacket, I have to wonder how many operators using the Eva Solo actually clean them properly. The jackets and sweaters are a pain in the ass to take off and the glass is extremely difficult to clean, so unless the shop you visit has strict and serious cleaning culture in place, chances are that the glass will be dirty.

Now, if I could only get the damned thing clean, we could use it again...
Posted by onocoffee at 3:44 PM 4 comments: Links to this post