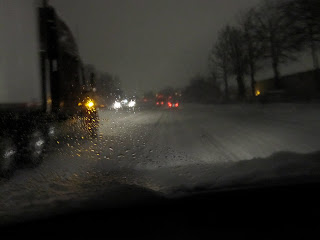 A tractor trailer ready to skid and crash into me on 83 North at 35 mph.

Here it is again. Snow. Up to twenty inches of the stuff. Some of my friends are crying and bemoaning more snowfall. I'm crying and bemoaning the fact that my Land Rover needs a new master cylinder and is not ready for this challenge, buried under thirty inches of snow. Instead, my trusty steed, the GMC Sonoma, has been performing admirably in blizzard conditions.

The weird thing about Baltimore is the general panic that ensues whenever snow is on the horizon. People go nuts. Bread, milk, eggs - they clear them out. The grocery stores are slammed as though people never stock their larders for more than a day. There's a rush on toilet paper??? Do people not keep toilet paper at home??? It's all very confounding to me.

As the snow starts to fall and everyone has rushed home, I've had enough of the fear and venture out to do something. But what to do on a day when everyone has panicked and gone home for the next three days? Ah, the cigar shop will be open!

Off to Towson Faders I go, where I find the usual motley assortment of regulars bored with the snow and being at home.

As the snow grows in intensity, so does the smoke filling the room. Conversation, camaraderie, jokes, stories, it's all good ensconced in the bubble of blue smoke surrounding us. Scott tells stories of explosives and fireworks in Buffalo, Bryan's neighbors don't help out in clearing the common alleyway, Mike's showing us photos on his Blackberry of the big-titted girl he's dating (and they are rather massive), Jim is showing everyone his new phone, Ron is talking about his radio show, Other Mike calls in periodically to tell us that he's on the way (he never makes it), that other guy is irritating everyone else and Ripley is sitting quietly to the side smoking those Nat Sherman cigarettes with the colorful wrappers.

It's a nice time and respite from the blustery weather that's piling snow at a rate of 1.5" per hour. By the time we leave, nearly five inches has fallen and everything is covered in white over a suspicious layer of slush and probably ice. The reports coming in throughout the evening have been ominnous. The roads are bad. Stay home. The governor might declare a state of emergency.

As I make my way home through the storm, the streets are snow-covered but nothing too difficult to navigate. They're nothing like the roads on Friday night - those were bad and I really thought that I could be in serious trouble. Tonight, it's relatively smooth sailing, except for the tractor trailers high-tailing it at high speed on 83 North.
Posted by onocoffee at 11:30 PM No comments: Links to this post 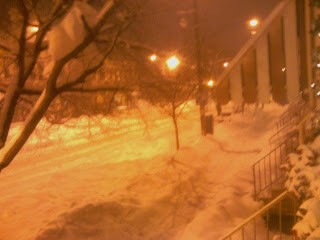 Thanks to my JHU Genius, the Hampden Plow Watch continues as the next Snowmaggedon or Snowpocalypse (who thinks of these corny names?) hits our little city. With a few inches of snow piled on the streets and mounds of snow to the sides, they are forecasting another 10-20 inches by tomorrow night. That's nearly four feet of snow since Saturday.

All this snow plus the ineffectiveness of Baltimore City in clearing its high streets has forced me to cancel all the work scheduled for project hampden through Thursday. Government agencies have been closed or severely limited making it virtually impossible to submit the filings for our permits and licenses to open. Just another delay.

I'm hoping that our city will resemble something workable by Friday so that people can start making money.
Posted by onocoffee at 10:55 PM No comments: Links to this post

You know your adversary is ruthless when you're on the verge of announcing a prize contest and she preempts you by retiring.

I just received multiple calls, messages and emails from industry friends across Baltimore that Elizabeth Large, my long-time culinary adversary and Baltimore Sun Food Critic has decided to retire this month. Humorously, some of them asked if I had a hand in her retirement and I have to respond with a resounding "I Hope So!"

All seriousness aside, I had been contemplating announcing a prize contest: $500 to the person who delivers to me a credible full-frontal face photo of Elizabeth Large. See, as much as I remain a critic of hers, I have to admit that after 36 years on the job, it's amazing that she has been able to retain her anonymity.

But instead of holding a contest and giving away free money, Ms. Large has thrown that away with her retirement announcement. Oh well, guess I'll use that money for champagne.

Best of luck to you Elizabeth Large in your future endeavors. I look forward to meeting you someday - and maybe even enjoying a meal together.
Posted by onocoffee at 1:26 PM No comments: Links to this post

Where To Learn A Focused Craft

Not too long ago, a young barista was relating to me the frustrations of working at their coffee place (no, this barista does not work for me) and how, someday, this barista wanted to go off and do her own thing in her city (she lives in a somewhat small town in the midwest with an average coffee scene and not many options). She was frustrated because she felt like she wasn't really learning anything more about coffee or the craft and it was starting to wear on her.

Because I tend to be a bit foolish in my own decisions, my universal answer for those who want to do their own thing is: "go out and do it". Stop wasting your time and just make it happen. Stop bitching, whining and moaning about things and start your own shop. Of course, without proper preparation, planning and financial resources, this often leads to ruin and greater hardship.

The next thought is to go out and find a place where you can learn the craft, expand your knowledge and really grow. In the restaurant business, you go out and find a chef who you admire and beg to work for him. It's a pretty simple process even though the mechanics of making it happen can be quite difficult. Even so, it's not impossible to get a simple stage (read: "stahj" as in French) at places like Le Bernardin or Per Se - if you really want one.

So the simple answer is to find a barista-driven coffee place where you can learn from someone with greater experience and vision. But where are these places in America (or the world, for that matter)?

As I sat down to think about it, I realized that there are many notable coffee houses in America creating excellent coffee, but how many of them are driven by a singular vision? How many of them are led by a barista craftsman? The more I thought about it, the harder it became.

I reflected about my own time learning the craft at Hines Public Market Coffee in Seattle. The old Hines is no longer there, the Two Johns have gone their separate ways and Hines now exists as strictly a roastery in Vancouver, British Columbia. No longer is there an espresso bar to learn lessons from Sanders and Hornall. The days of sending novice baristas interested in learning the craft to Hines are over.

Most coffeeshops today have great baristas but it seems to be more of a communal effort towards coffee excellence rather than a singular vision. The West Coast Intelligentsias, Blue Bottle, Ritual, Stumptown and many others produce amazing coffee and are great learning grounds, but I'm confounded about where to send someone when they want to learn a focused craft.

After awhile, some places came to mind where the coffeehouse is run by a barista focused on producing the best coffee possible. Anthony Rue of Gainesville's Volta Coffee & Tea came to mind first. Then Aaron Ultimo's eponymous coffee place in Philadelphia. John & YiChing Piquet run the fashionably small and super-hardcore Caffe d'Bolla in Salt Lake City, and Billy Wilson's Barista in Portland, OR.

Over the next couple of weeks, I'll be compiling a list of places that would be great training grounds for this barista. Perhaps you might have some suggestions? Post them here.
Posted by onocoffee at 12:02 PM 4 comments: Links to this post 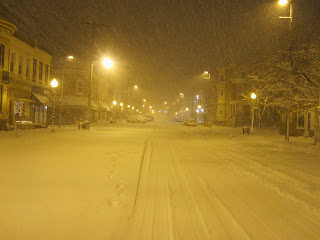 Over 48 hours after the blizzard dumped 30 inches of snow and The Avenue, Hampden's high street, is still covered in snow. And we're expecting another 20 inches starting tomorrow. Great. 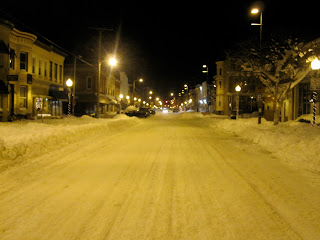 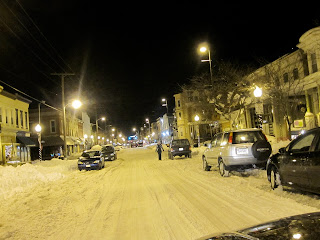