On The Road With Parents 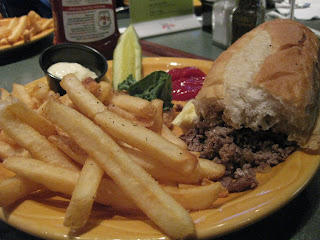 My Philly Cheesesteak at The Greene Turtle.

After a few days at home, I'm back on the road again and headed for Los Angeles. This time, I've got Mom and Dad in tow which means that we're headed to the airport early.

When it comes to traveling, my father is a bit of a worry-wort. If the flight leaves at 5pm, he wants to be there at 3pm, two-thirty would be even better in his mind.

As for myself, I prefer the endurance of travel to be as short as possible. If we don't have to check in until an hour before the flight, then I don't want to be there even 61 minutes ahead of time. Better yet if I can squeeze in at 45 minutes. Naturally, this causes a bit of friction between the two of us as we spar and parry for the advantage.

Today, I'm just not in the mood to debate the issue and since we're leaving my truck at the airport parking lot, I realize we need to get there a bit earlier than usual for me. Even after the delay of driving to the parking lot, gathering our stuff, taking the shuttle to the terminal, checking in and going through security, we're still two hours ahead of our flight time.

Luckily, there's some things to take care of before our flight. Dad wants to find a sudoku book and we're off to the bookstore. As he searches the stacks, I spy the latest issue of Cigar Aficionado with Daniel Craig on the cover and instantly nurture fantasies of my traveling around the world being surrounded by sexy women. Mom is reviewing the gossip magazines.

Even after we finish our pre-flight shopping, there's still 1:45 left before our flight. Maybe we should get something to eat.

In the D Concourse is a branch of The Greene Turtle - Ocean City, Maryland's famous bar with locations in Towson and around the state. Since I'm usually arriving just in time for my flights, I never have the time to eat here but today, we've got all the time in the world.

Right away, I'm disappointed. I was hoping for some of their appetizer options like they have at their Towson location. The airport menu is extremely limited to a selection of sandwiches. My dad goes for the Chesapeake Burger with crab imperial, bacon and American cheese. Mom chooses the Pigskin Burger with grilled ham and swiss cheese. I go with the Philly Cheesesteak.

The food is typical bar fare. Nothing spectacular but not atrocious. The fries are frozen processed fries that beg for ketchup and my cheesesteak is a bit heavy on the sodium but neither good nor bad. It just is. I wish they had their appetizer menu here.

We hang out at the Greene Turtle for about an hour before we saunter down to our gate. As we approach, I notice that they've already started boarding. Huh? Our flight isn't until 5:45pm, it's five minutes past five - what's the deal? 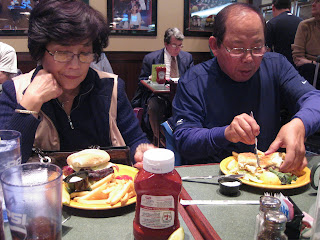 Mom and Dad and their burgers.

My parents don't notice and decide to go to the bathroom before we leave. No problem I tell them. I don't bother to tell my dad they've already started boarding because he'll probably get upset. As I approach the gate, I notice that the departure time is 5:25pm and not 5:45pm - ooops!

To be honest, when it comes to flying, I'm pretty bad at it. I tend to know the general time of the flight and just go with that. Plus, I'm not one who likes to board early, or even with my group boarding number (even though with my status, I can board first). No, I prefer to board last. Dead last even. I don't want to spend any longer inside that aluminum tube than I absolutely must. Besides, when you're the absolutely last person to board, you know there's no one behind you which means you can grab any open seat you'd like - it's not as though someone else is going to board and tell you that you're in their seat!

By the time my parents return, boarding is almost complete. Everyone else has gotten on board already and they're just waiting for us. My dad's a little surprised that we're the last ones left but we still made the flight and we're on our way.

Not a bad way to start our trip.
Posted by onocoffee at 4:37 PM No comments: Links to this post