And I dress this way just to keep them at bay
'Cause Halloween is Everyday.
- Ministry 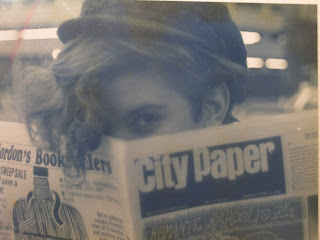 Alicia and The City Paper, April 1987

Once upon a time, there was no such thing as "goth." It just was and nothing more. The late 1970s and early 1980s brought The New Romatic and New Wave periods where people like Steven Strange and David Sylvian made their marks. It was a time of glam and makeup - and we missed it. Completely. 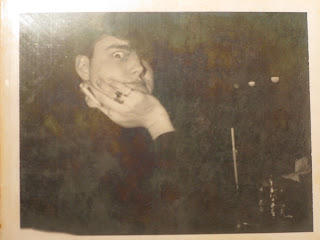 Kirk's photo for the Bored In The Suburbs From Hell Event poster. He's a nurse now.

What may be known today as the definition of goth was then just part of the scene. Siouxsie and the Banshees, Bauhaus, The Cure, Joy Division, New Order, Dead Can Dance, The Sisters of Mercy and others were just "alternative" - back when "alternative" really meant alternative. Today, Gwen Stefani's poseur-Japanese pop can be categorized "alternative." Hell, back then, even U2 was considered alternative. 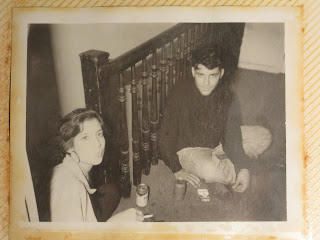 Lis is a high-powered D.C. attorney. Mike is a chef.

Truth be told, I'll let stalwarts and Wikipedia argue and debate just what is and is not "goth." All I know is that our crowd lived it. And we didn't have places like Hot Topix to buy clothes or Nordstrom to by Docs. Back then, you had to make your own clothes and travel to 99X in New York City to buy Doc Martens from the English lady who flew to London twice a year to stock up on the latest footwear trends.

And once you had your Docs, you'd better be prepared to fight for them because, somehow, the skinheads formed the idea that only they should have the God-given right to wear Docs. They wanted to beat you up and take them from you. 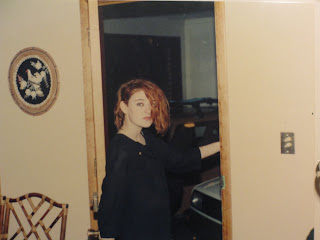 Jo is now an artist in Los Angeles.

But those were good times. Simple times. No cell phones. No ATM cards. No credit cards. Just your friends and Friday's at Cignel, the Baltimore club that on Friday night would host the avant-garde scene and its' requisite music. From 11pm to 4am, you could dance your heart out, make out on the risers, drink spiked punch, or find someone to get high with or take home in the morning before the sun rose. It was the best of times. 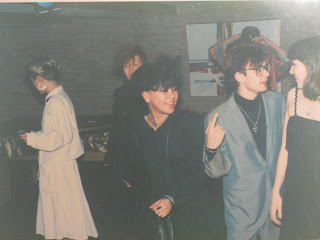 Typically, we'd plan on meeting around 9pm at Louie's The Bookstore Cafe on Charles Street. Louie's was ground zero for all the happened in those days. It was the logical and easiest place to meet while eating light fare, drinking hot tea, reading arts magazines and looking cool. The then Annapolis-based WHFS 99.1FM was in its' heyday, Ronald Reagan was president, the Cold War was still threatening Nuclear Winter and no one knew if we would make it through another year without getting annihilated by the Soviets. It couldn't have been a better time for the death, doom, damnation and angst of youth. 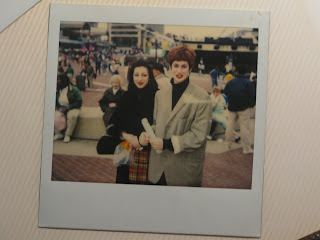 Two French Girls - Chad and I were so in love with them.

Today, all that has changed. They've finally given our thing a name: goth - and found a way to market it. You can go to your local suburban mall and outfit yourself as a "goth." Quaint. I'm no longer in touch with "the scene" and I wonder if it still exists, and if so, in what form? Do they still have a club to go to on weekends? Is there a "scene" like Mount Vernon for them to hang out? Is today's "goth" a vibrant, evolving thing? Or has it been reduced to a level of uniform that doesn't allow it to evolve naturally?

The "goth" scene of our day morphed from the Punk, New Wave and New Romantic scenes before us. I wonder if the morphing continues. Whatever the case may be, those were the formative years of life and we learned more than most of our peers how to get along with people of different strata and styles. It helped us to develop into (what I hope are) rounded and open-minded individuals.

Meanwhile, I'll always harbor a quiet penchant for those stylish goth girls of yesterday and today. So please, keep the great hair and great style coming, because even though I don't look like I would ever fit in with today's scene, I still appreciate the lifestyle. 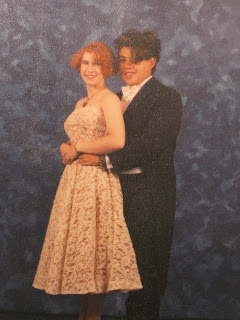 Yes, I went to Senior Prom - with Alicia.
Posted by onocoffee at 7:10 PM 8 comments: Links to this post 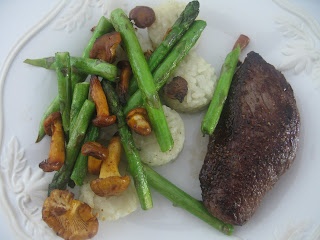 It's Sunday and I feel like relaxing a bit today. Not doing too much. Taking it easy.

Not too long ago I was decrying the coulette steak. Now, I'm an absolute fan. For last week's fundraiser for the Maryland Food Bank, Roseda Beef donated the meat for the dinner. We had some leftovers that became my bounty. The coulette is a small, French cut - about four ounces. It's the hind end of the sirloin, but unlike the description the bartender gave me, it's wonderfully flavorful. She actually said that it was leaner than sirloin (and it probably is) but she didn't sell it. It's small but full of flavor, not to mention deliciously tender. I've been making all week for breakfast - usually with eggs and rice.

Today, I decided for a little twist. Some risotto cakes, some sauteed chanterelles some sauteed asparagus and the butter seared coulette. How can you go wrong?

I've got a bag full of green heirloom tomatoes that I picked up from Reid's Orchards last weekend and they're getting long in the tooth. They're absolutely delicious but we ended up not using them for Tuesday's fundraiser and now they're just sitting there looking pretty but wasting away. The vacuum sealer is still down and I'm at a loss.

That's when I decided to give them a little confit action. Peeled the tomatoes by scoring, dip in boiling water for 20 seconds and cool in an ice water bath. The skins should peel off easily. Core and seed the tomatoes - reserving the loosey and juicy stuff for juice. Line an oven pan (or casserole) with fresh basil (I raped my lone basil plant, poor thing) and line the pan with seeded and cored tomatoes with the core side down. The tomatoes should be one layer but be crowded in the pan.

Sprinkle the tomatoes with sea salt and then coat liberally with olive oil and bake in the oven (convection off) for 50 minutes at 350F. Tomatoes are done when they've browned but are still slightly firm. Eat the tomatoes and reserve the oil for seasoning - it is now infused with the flavor of tomato.

I've poured my tomato confit in a jar and placed in the fridge for eating soon to commence. 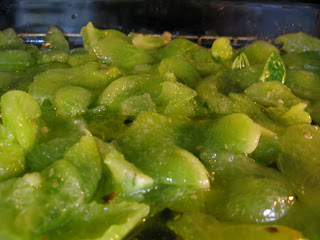 Tomatoesin the oven confit-ing.
Posted by onocoffee at 1:47 PM No comments: Links to this post