Is That A Lightsaber??? 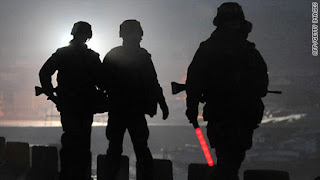 These aren't the Weapons of Mass Destruction you're looking for.

I don't know how long it's going to be there, but on CNN.com
today is a photo captioned "Trouble In The Land Of Morning Calm" with silhouettes of three soldiers, one carrying what looks to be a lightsaber.

The Empire Has Landed?

The Sound of Silence

For such a long time, there's been a low humming sound that has slowly been driving me crazy. And last night it finally got to me.

Unlike most people who simply go out and buy some sort of sound system for their computer, I've cobbled mine together from years of leftover equipment. From the computer (a ten year old Mac G4/500 dual processor) into a Numark PPD mixer that feeds to an Audio Source graphic equalizer to a Furman crossover that splits the signal into multiple amps that feed either a Toa concert subwoofer and Tannoy near-field reference studio monitors.

For such a simple setup, the sound is quite clean and the performance impressive. House shaking decibel levels are possible and when I pump up Nuttin' But A G Thang by Dr. Dre you can feel the bass hit your eardrums like a slug to your head...

The problem has been this incessant humming that I've noticed recently. Like most professionals I know, the home rig is always fraught with little bugs that never get resolved because most of the work is done in the real world and the home world is just a little less than perfect.

So rather than go through the system and debug, I've simply lived with it. Until this morning.

In the end, I discovered the incessant hum wasn't from the audio system - surprisingly, the system runs clean, it was from the ten year old Mac G4/500MP.

Unbelievable how loud that machine is. Time for a new one.
Posted by onocoffee at 11:11 AM No comments: Links to this post