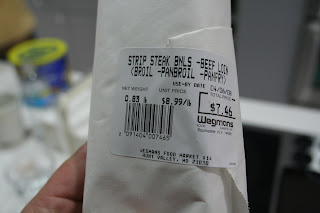 As you can see from this image, I don't always have access to grass-fed cattle and, every once in a while, must resort to commercial meats. It's the nature of our industrial economy.

At the risk of Wegman's-bashing again, I just have to vent a little. Yes, the meats are nicely arranged and look rather tasty in the cold case. And I'm glad I can choose the cut I want and have it wrapped in butchers' paper. But it would be even better if the butcher knew the provenance of his meats. When I asked him if it was "commercial", he said it came from "Colorado" but didn't know where. Corn fed, maybe? His reply was "the last two weeks." Well, what does that mean? Are you being purposefully vague because you don't want to admit that the meat comes from feedlot cattle in Colorado? And that by answering ambiguously I'll think that the cow has been eating something other than corn feed?

Oh, the sacrifices one must make in pursuit of his craft...

I've had the idea of sous vide steak in my mind for some time now and finally decided to give it a try and borrow some cues from Heston Blumenthal's "In Search of Perfection" television show. 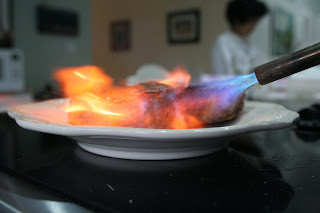 I'm certain that you can use practically any cut of steak out there but the goals are to cook a steak that's got the caramelized characteristics of being cooked in a pan or on a grill while maintaining an even and consistent interior throughout. If you ever noticed on your steaks that it's pink on the inside and gradually greying towards the exterior, I wanted to eliminate that and have an interior that's like a center cut of prime rib and wonderfully soft and meaty inside.

To start off, sprinkle salt and fresh ground pepper and let the steak sit out at room temperature for about half an hour. Next, take a blow torch and use it to quickly caramelize the exterior of the steak. Char it as much as you desire, but do it quickly. You want to char the exterior without warming up the interior and causing it to grey. Be sure that your torch and nozzle are clean - better to have one for the kitchen rather than pulling the one off your metalwork bench. 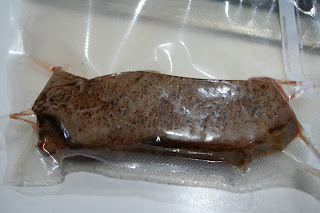 From there, take the steak and seal it in a vacuum bag. You'll need a vacuum sealer for this. A nice chamber vacuum sealer is ideal, but if you're not into spending $3,000 on a lovely Minipack-Torre or Bosch, a simple FoodSaver ($175 at Costco with extra bags) will suffice. In fact, it's what I use at home.

From there, it's pretty simple. Bust out the PolyScience Immersion Circulator - what? You don't have one at home? Sucks to be you... But seriously, doing this sous vide thing seems terribly difficult unless you've got some sort of device that can accurately regulate and maintain temperature. Admittedly, the PolyScience model is on the pricey side, but it's top-quality and well worth the money. Though you can find similar models at laboratory supply houses and on eBay. 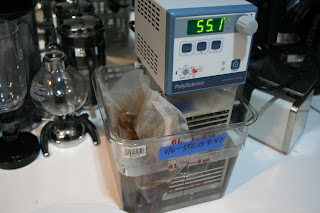 For this test, I decided to cook the steak for 12 hours at 55 degrees Celcius (that's 131 degrees Fahrenheit).

Twelve hours is a long time for something to cook. But at least it gave me time to drive to Hanover, Pennsylvania, have brunch, attend my nephew's First Communion, meeting the aunt of another first communion-er and getting her phone number , eat lunch, drive back, hang out, make chicken stock and finish the potatoes. Not a bad way to spend a Sunday. 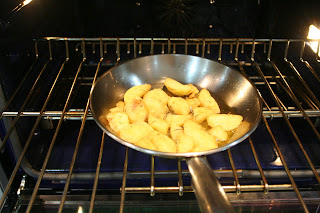 The potatoes were relatively simple. Take the potatoes, peel them, cut them into chunks and run under cold water to remove excess starch. Cook in boiling salted water for 20 minutes - until the potatoes start to become craggly. I like to include the skins with the boil for extra flavor. And be careful when you reach the 20 minute mark. Cook it too long and the potatoes will break down and make potato soup (keep some leeks on hand).

Drain in a colander or china cap and set aside for about ten minutes to let the potatoes cool and the moisture to evaporate. Heat some olive oil in a pan and add the potatoes. They should sizzle because of the heat. Make sure the potatoes are coated in the hot oil and toss the whole thing into a 350 degree Fahrenheit oven for one hour. A nice, brown crust will form. Add some salt and rosemary during the last ten minutes of the roast. 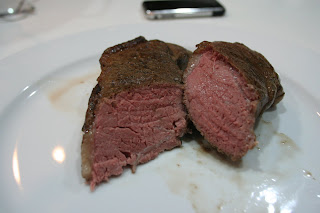 After twelve hours, pull the bag out of the water and rip it open. There will be lots of jus that you can reserve and use or just discard - but what a shame that would be. The steak looked marvelous and had cooked in it's own juices the entire time. A strong beefy aroma filled my nostrils. Luxurious. Intoxicating.

Looking at the image above, the meat was just right. Wonderfully pink throughout and very even in tone. Caramelized exterior and the texture was soft, moist and just like a slow-roasted prime rib. The flavor was also very beefy and rich. It was so rich tasting that I couldn't believe it was commercial. I'm not excited to see how our usual grass-fed beef will turn out with this process. 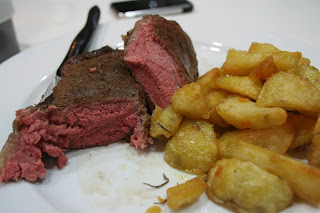 One thing to note, there is some question in my mind asking just how long should the cook time be? How long is enough to cook the meat all the way through and break down the fibers for the desired texture? Five hours? Ten? Twelve? More? If five hours will work, then all the better. Would a higher temperature work better? For the restaurant operator, this method produces very little heat shrinkage, increasing yield.

What I would like to improve is the caramelization. It was a bit soft. I wanted a little more of that caramelized flavor to come through. Next time I'll give it a harder application of the blowtorch to get a little more charring.

But the real question is how applicable is this for the small operator? Meaning, could this be a viable route for a joint without a traditional cooking line? Does this now allow us to offer steak at places like The Spro? Can we viably start a hot menu with only an immersion circulator and an Alto Shaam? Compelling questions indeed.

NOTE: One thing I want to note for those of you who are going to try this on your own. Remember that 131F is within the Food Safety "Danger Zone" where bacterial contamination is very possible. Proper handling of the meat and cleanliness all the way around is extremely important. Heston Blumenthal says that the blowtorch helps to kill any surface bacteria that may be present, but use extreme care. For a production environment, I would prefer to use a temperature above the "Danger Zone" (40-140F), somewhere above 60C to reduce the possibility of contamination.

And if you're eating it yourself, you're still on your own. Don't blame me if you handle your food improperly and are killed because of it.

A great resource for sous vide cooking is "Sous Vide Cuisine" by Joan Roca and Salvador Brugues. It's an excellent reference that costs a pretty penny but if you're serious, then it's a 'must have' tome. I used it for some reference points for this test. 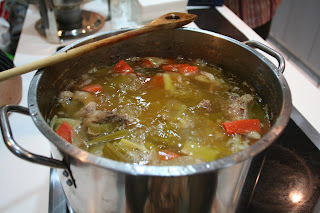 See? I even had time to whip up six quarts of chicken stock using ten pounds of free-range chicken backs from Springfield Farm, onions, carrots, celery, black peppercorns and bay leaves.
Posted by onocoffee at 10:03 PM 3 comments: Links to this post