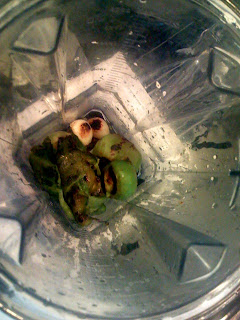 After eating so much good and fresh food in Mexico City, I can't get enough. Instead of merely expanding my appreciation for food, it's increased my desire to only have quality fresh food. And since I can't always buy it, I have to make it.

The day started with a visit to the local Mexican grocery in Fells Point. It's a small joint but chock full of just about everything anyone needs to make nearly anything authentic - including a large room filled with CDs and DVDs. Fresh tomatillos and nopal are not a problem here. And there's a Panaderia next door and a tortilleria down the street, making it virtual one-stop shopping for your Mexican needs.

Today's shopping list includes the above mentioned tomatillos, as well as: tomatoes, garlic, jalapenos, limes, poblanos, Maseca, queso Oaxaqueno, canned adobo chiles, queso anejo, onions and a tortilla press. Then some pan dulce from the panaderia next door and some tortilla chips from Tortilleria Sinaloa down the street.

Of course, when it comes to Mexican cuisine, I'm just a neophyte who's only eaten at El Vip Sito. I don't know what I'm doing or how to do it. That's why I've turned to experts like Spike Gjerde and Rick Bayless (by way of his cookbook) to guide me in the discovery. 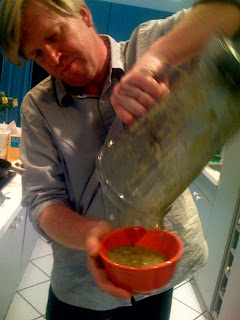 Chef Spike pours out the freshly made salsa verde.

I've been flying relatively blind during my shopping excursion. I just picked up the items in the amounts I thought would be best - regardless of what Bayless' recipe might have suggested. By my own admittance, I prefer cooking to baking. Cooking is open, expressive and ready for interpretation. Baking is precise, measured and any degree of "improvisation" can render the batch benign or worse. Baking is too restrictive for my wandering mind.

Luckily, Spike is an "on the fly" kind of guy and the quantities I've purchased pose no problem. First, the salsa verde. Grab the tomatillos, jalapenos and garlic and roast them in a pan until scorched. Remove their skins and drop into a blender. Chop up some white onion - hell, roast those too! Add some cilantro and salt and blend that sucker down until chunky and "dippable." Done. Finished. Grab some chips and dig in. But better yet, let it sit overnight and allow the flavors to mingle and the heat to increase. 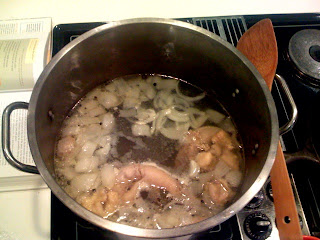 Working up the stock with some chicken, onion, carrots, pepper and bay leaves.

I'm not only making food to eat for dinner, I'm also planning tomorrow's meal at The Spro. It's going to be an open to close day for me (8am to 8pm) and I need to eat something other than blueberry muffins or a stromboli from the local pizza delivery joint. With that in mind, I'm starting up a chicken stock for tomorrow's soup. In a large pot goes half a chicken, plus some miscellaneous body parts, i.e. necks and short ends, as well as whole peppercorns, a couple bay leaves, chopped onions, chopped carrots and a little cilantro. I might have added more but I was running out of ingredients.

Bring the pot to a boil then simmer for an hour, skimming the scum off the top the whole time. Don't let it boil otherwise it won't be clear. But definitely remove the scum as it forms. Don't be lazy and wait until the end to skim! 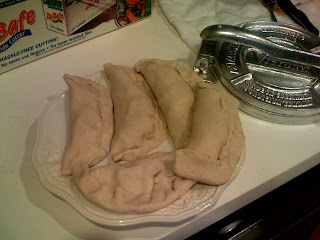 My first attempt at quesadilla/empanada not looking too shabby.

It's my first time working with Maseca and I'm finding it to be pretty simple. We work up a small batch and make some corn tortillas, just to check things out. They turn out decent and now it's on to the quesadilla.

When it comes to the quesadilla, I really have very little clue as to what I'm doing. I'm now running strictly on what I saw the lady at Fiesta Mexicana doing. Ball up a little of the Maseca, place in the tortilla press and press it down. Drop some queso Oaxaqueno in the middle along with some meat and fold it over. Easy peazy.

Of course, I find out that it's much harder than that lady made it seem. She did it with such casual elegance and I'm fumbling around flustered. Perhaps it's the amount of Maseca or the amount of pressure but I'm definitely finding some thin spots where my stuffing is popping through. A Patricia Quintana I am not.

Taking cues from the lady serving quesadillas outside of the Gigante supermercado in Mexico City, I make a few with ham and cheese. The rest I decide to make something a bit more reflective of my personal tastes - a little Queso Oaxaqueno and some freshly cooked and sliced onglet. 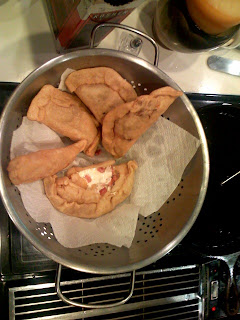 The quesadillas fresh out of the frypan.

I believe that the lady outside of Gigante fried her quesadillas in pork lard and as much as I fancy myself the kind of cook who would use pork lard without a second thought, I don't have any around the house. Although I do have a 40lb. jug of peanut oil that I think it up to the task.

Preheating the peanut oil in my trusty 12" cast iron skillet to 375F, I drop the quesadillas into the gleaming oil. They snap, crackle and pop as they fry angrily in the oil. Watching them turn a golden brown is true magic. That crisping nature of oil that seals the food and actually steams the interior is just amazing. It's beautiful. 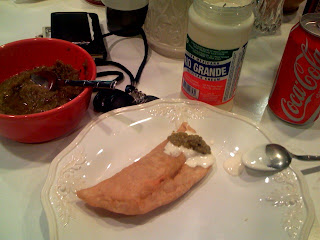 Serving it up with some crema, salsa verde and Coke.

Unfortunately, that lady in front of Gigante is an expert. My measly attempt results in a couple of them breaking open and direct frying the interior. For a moment I think about pulling it out and trying to graft a new piece of Maseca over the exposed wound, but I decide to move forward and eat the tragedy instead.

With the quesadilla fried to a golden brown, it's time to eat one and see just how it turned out. I dig up one of the Onglet y Queso ones, top it with some crema and salsa verde and tear into it. 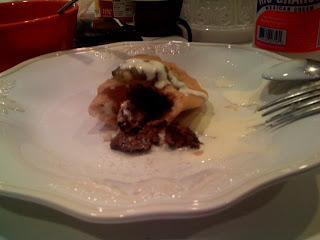 A glimpse of my Onglet Quesadilla.

The quesadilla is just right. Crispy on the outside, chewy on the inside. The queso has melted into a brilliant emulsion with the hanger steak. I cooked the hanger steak to a carmelized medium prior to stuffing and it's just right. The only problem is that the flavor is a bit flat. Queso Oaxaqueno is a mild cheese and the onglet wasn't salted enough so it's all a bit flat - even with a healthy dose of salsa verde and crema. While not the end of the world, I prefer things to be served ready to eat and not in need of the salt I'm pouring over the steak. Note for next time: don't be afraid of the salt.
Posted by onocoffee at 10:53 PM No comments: Links to this post