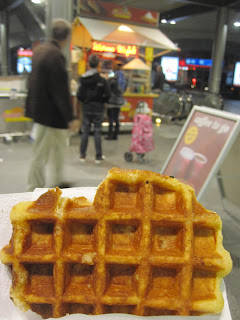 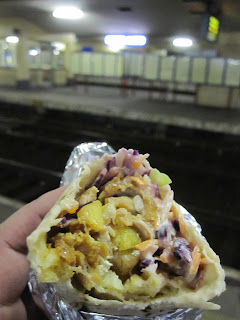 Doner with frites at Brussels Nord. 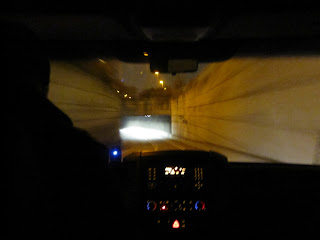 Racing back to the Novotel.
Posted by onocoffee at 9:29 PM No comments: Links to this post

The Delights of Antwerp 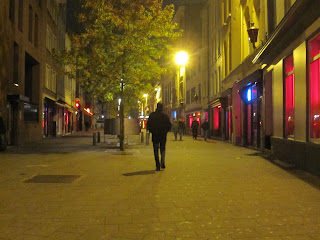 Legal sex and brothels don't really exist in the United States. Yes, Nevada has their chicken ranches but no one seems to do the Sex Trade quite like the Europeans. I heard that Antwerp had a Red Light District (RLD) similar to Amsterdam and since dinner at inVINcible was a bust, I might as well see what else Antwerp had to offer

The RLD here is much smaller than Amsterdam but the selection of women is quite good. Girls of all sizes and types are on offer to suit your needs and tastes. Transexuals are even on offer to suit those of you who prefer a little something extra...

Like Amsterdam, the girls stand in glass doorways in bikinis or lingerie enticing you to purchase their wares. Police presence is heavy so it's unwise to do anything criminal.

If you're interested, simply walk up to the girl of your choice and start negotiating. From what I can tell, just about everything is on offer. Sex, oral sex, perversions, whatever your desires, there's someone here that will accommodate you.

I talked to a couple of the girls to see the going rate. €50 will get you basic sex and it goes up from there. Fifty euros sounds like a lot and I don't even have that much in my pocket. I ask one girl if she'll take a credit card - as she closes the door on me.

So much for partaking in the delights of Antwerp.
Posted by onocoffee at 7:29 PM No comments: Links to this post 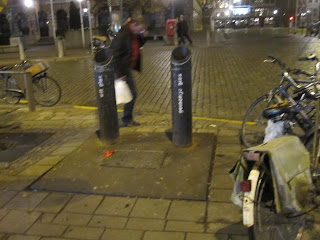 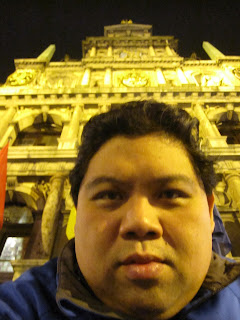 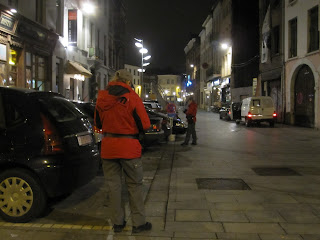 Meter Maids Make Money For Government.
Posted by onocoffee at 6:58 PM No comments: Links to this post 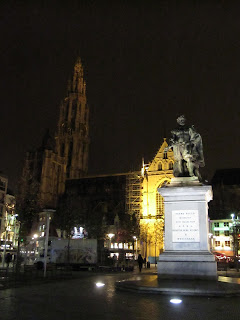 I work my way northwest from the Central Station to Groenplaats then walk several blocks in search of Restuarant InVINcible to visit Kenny and try some of his food. This is old part of the city and the streets are small but easy to navigate.

Maybe this is indicative of Belgium as a whole but this city seems very cosmopolitan, meaning that people speak all sorts of languages here. Everywhere I go, I'm hearing languages that I'm not familiar with. Supposedly, Belgium is a French-speaking country, but I'm almost certain that I'm hearing and reading a lot of German as well. 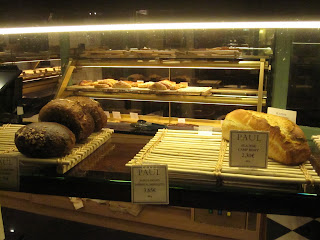 Where one moment, I think it might be appropriate to say "Bounjour", I'm greeted with "Guten tag." Not to mention these other Danish dialects. It's kinda confusing and I'm not sure what to say anymore and revert to the relatively safe "Hello" or the more Continental "Hallo".

The city is confoundingly familiar (the boulangeries) while being unfamiliar (everything else). 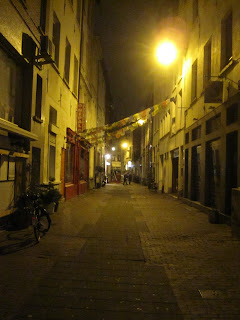 Restaurant InVINcible: So close, yet so far.

Finally, I make it to the restaurant. It's about 6pm. The place is empty. I find Kenny. He looks at me quizzically. "Rouki sent me," I tell him. "Are you open?"

What I've not considered is that the Belgians are like the French, the restaurants don't open until 7pm. And what is currently an empty and deserted restaurant will fill with hungry diners in about an hour.

Sometimes I visit restaurants early in the hopes of dropping in, grabbing a quick meal and getting out before their first full seating hits the tables. That way I eat without a reservation, they get another turn (and more cash) and I get to try yet another known restaurant.

Kenny is the current Barista Champion of Belgium and I'm hoping that my name dropping would swing me a place to sit. Feed me for 30 minutes and I'll be out of your way. Maybe I should drop my name and tell him where I'm from? I decide against it. It's really not my style to name drop and push.

It's obvious that Kenny, while being friendly and polite, isn't interested in accommodating me this evening. The book is full and that's that. I respect can respect that and ask for alternative recommendations. He recommends another restaurant his friend owns. Sounds interesting but I really came to meet Kenny and see how a barista envisions a restaurant and since that's not going to happen, I don't care to eat fancy tonight. How about frites? 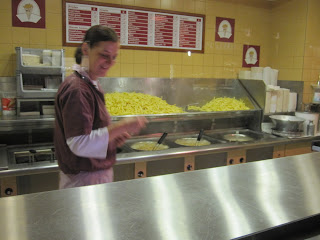 Kenny tells me the best frites in Antwerp are just around the corner at a place called "number one". Number One? Yes, Number One. Just turn left.

Belgian Frites. I've been wondering what the hoopla is all about as I've heard so many good things about frites here. Back in June, when Ana and I were transferring at Brussels Midi from the EuroStar to the Thalys, I thought about jaunting off to Maison Antoine for a round of frites, but as we had too many bags to lug across the city and I'm relatively sure Ana would be rather upset if I left her at the train station with our bags while I went off to Antoine, I ended up never having tried Belgian Frites. Until now. 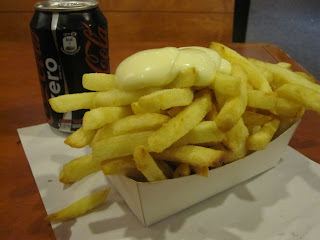 Proper Belgian Frites are double fried, tossed with salt, scooped into a paper tub or tube and then topped with the sauce of your choice.

To be honest, I'm not a fries and sauce kind of guy. Give it to me perfectly fried and delicately seasoned with salt and I'm very, very happy. Frituur No. 1 is serious about their frites. The girls work it in huge deep vat fryers. The oil boils angrily and I'm excited. She asks about my choice of sauce. I tell her mayonnaise since it's traditional here. She prepares my order and hands me the tub.

It's insane. The frites are piled high and this thing is massive. It's obviously too much for one person. My doctor said I should lower my Triglycerides - this is not the proper path. I'm aghast. But I was once a Boy Scout and I'm going to giving that old scout try! 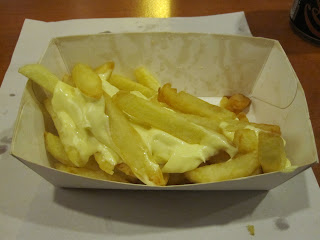 I could go no more.

Really, it's too much. One person should not consume one entire order. I can't do it. Maybe once upon a time, I could tear it up but no more. I'm an amateur. The mayo is seriously thick and rich and very unlike any mayo I've had before. Problem is: it's still mayo and I think that's gross. I'm not a mayo on my fries kind of guy. Give it to me plain.

So how was it? Were these the best frites in Antwerp? Maybe. Probably. They were very good. But were they amongst "the best" fries in the world?

The French, the Francophiles and the Belgians are probably going to hate me for this, but I'm starting to think that I just don't like their fries. Yes, they're double-fried but they're not crisp on the outside. They're close but I want a definitive snap. I wonder what temperatures they use for frying here but I've yet to have a frite in Europe that was better than what I can get back in the United States.

There. I've said it. Call me a heretic. But I still think the gold standard in American fries is Les Halles Park Avenue in New York City. I ate there in September and their fries reaffirmed my stance. Better than Le Severo in Paris. Yes, Better. Sorry.
Posted by onocoffee at 6:49 PM No comments: Links to this post 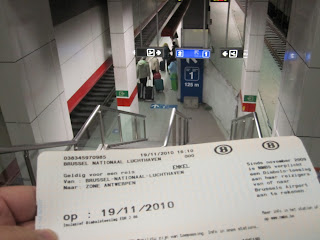 Of course I spent my day in Brussels by going to Antwerpen.

But that wasn't until I finally convinced myself to climb out of bed and get cracking. Afterall, it was nearly two in the afternoon!

The problem with travel is this jet lag. I'm tired and just want to sleep, but if I sleep all day then I won't sleep at night, which compounds problems later. The gamble is that I will sleep on the ten hour flight to Africa, but it's very difficult for me to sleep on a plane and that could easily translate into 48 hours without sleeping. Not good.

In reality, the options are at my feet. I've got eighteen hours to do whatever I please. I could go to Paris. Or find Brussels best frites. Or their best moules. Or maybe speak at the European Union Headquarters. Whatever I desire lies at my feet.

Therefore, I'm off to Antwerpen where Rouki has urged me to visit Kenny, the Belgian Barista Champion who owns a restaurant wine bar there. I'm game to try good food and see how a barista has envisioned a restaurant, so I'm off to the train stations and the commute north. 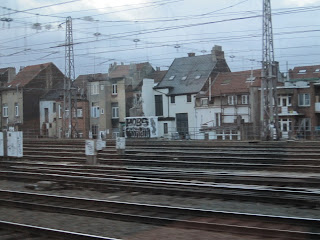 The Europe of My Mind's Eye.

As the train cruises through north Brussels, I see the Europe of my mind's eye. This is the Europe I imagined in 1987. Worn, tired, overcast and grey. This part of the city looks drab and dreary. This is how I imagined Europe during the Cold War. There is no sun. Just the even grey of overcast clouds. It's dour but not quite depressing. I regret not visiting Europe during high school to compare that world to our world today. 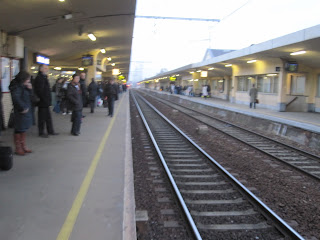 e travel to Antwerpen is relatively easy. This is train travel of Europeans. €9,40 takes you all the way from Brussels Airport to Antwerpen, with a train transfer at Brussels Noord. About fifteen minutes from Antwerpen, I'm busted for sitting in the wrong train car. Turns out I'm sitting in the plush comfort of First Class when all I have is a lowly Second Class ticket. The conductor could charge me more but decides to let me move to the proper car. I had no idea. 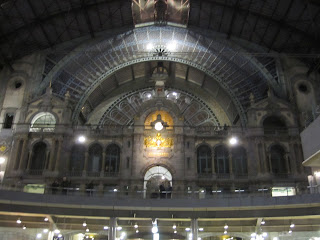 Antwerp Centraal Station.
Posted by onocoffee at 5:18 PM No comments: Links to this post 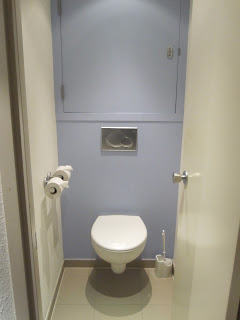 The Novotel Hotel welcomes my derriere.

I'm taking a brief respite on the way to Europe in Brussels. Instead of doing the ten hour marathon to Kampala immediately after the seven hour hop from Dulles, it's better to rest a bit in Europe for a day, decompress, readjust and then continue on in the morning.

Overnight flights are always brutal, regardless of class of service. Departing Dulles at 6pm, we arrive in Brussels around midnight East Coast USA time. On normal days, I'm not even in bed by midnight so trying to sleep at what is essentially 8pm is futile exercise. 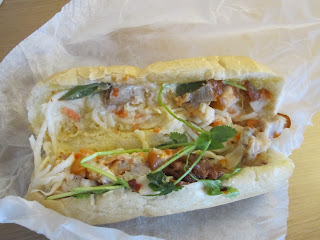 Happily, the Novotel is used to guests leaving early and, more importantly, arriving early as they had my room ready when I arrived at 9am. Merci beaucoup!

The room is nice. Nothing spectacular, nothing overly luxurious - just completely functional, clean and comfortable. Perfect for an overnight jaunt. I hit the bed and sleep until 1pm when I start to evaluate just what I want to do with my remaining time in Europe.
Posted by onocoffee at 2:27 PM No comments: Links to this post 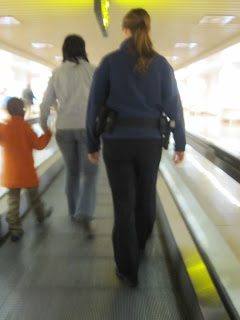 Female Belgian Police officer who reminds me of Rouki.
Posted by onocoffee at 8:10 AM No comments: Links to this post 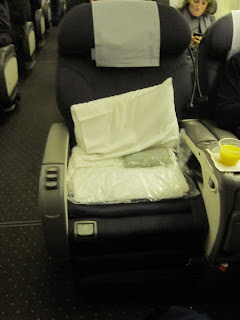 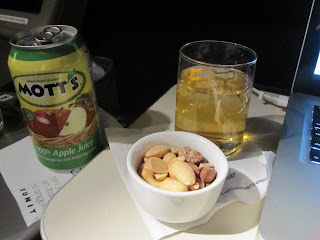 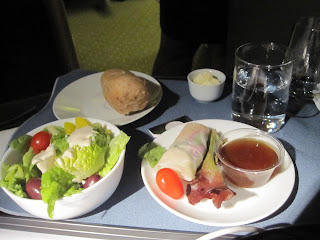 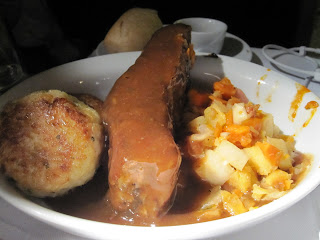 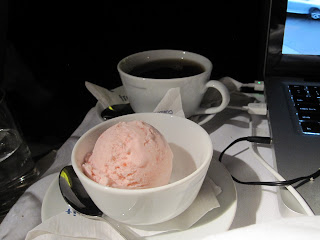 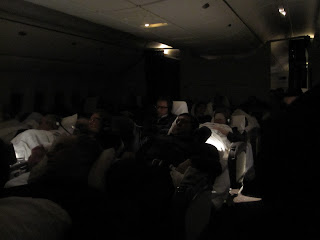 Everyone sleeps in Business Class. Except me.
Posted by onocoffee at 7:35 AM No comments: Links to this post