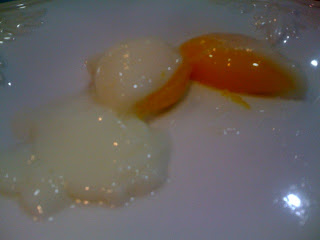 In between recording sessions (where I've been digitizing my twenty-five year old collection of 7" 45rpm records), training a new barista and watching a marathon featuring The Matrix, The Matrix Reloaded and The Matrix Revolutions, I'm been playing with my eggs...

First up was the eight hour sous vide of eggs at 60C. Determined to see if my recollection was accurate, I forged on. The results were pretty good but took insanely long to achieve. A nice texture to the yolk but I'm playing with commercial eggs and the flavor is, well, less than desirable. Certainly not the rich flavor of the eggs I usually source from Springfield Farm. 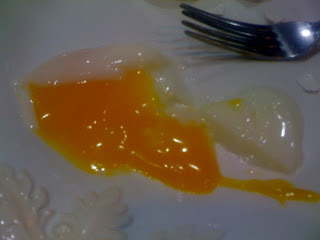 I received some great comments from Thursdays' attempt and decided to give them a whirl. Alex suggested trying 63.8C (don't know why it's not just 64.0, but he knows better than I do) for one hour and the result was velvety and luxurious while still maintaining a softness.

What these eggs really need is some salt to kick 'em up a notch. Yes, it's the evening of cheesy lines and bad puns. 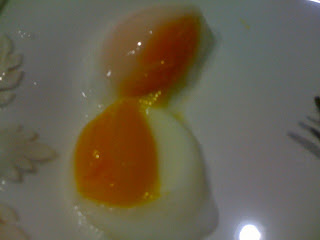 Alex and an anonymous commenter also suggested trying the eggs at 65.0C. Another hour later, the egg was ready and this time the yolk was firmer and closer to what I'm looking for. The white remain on the loose side but the yolk is looking very promising. My mom, ever the conscience, wanted to point out that this wasn't very suitable for a restaurant since it takes so long to make the egg. I wanted to eggsplain that these won't be cooked a la minute but decided that some things are better left for later.

So, we're on the road to eggs. I need to get a new supply of farm eggs instead of these commercial suckers to really get a feel for what we're going to do with them, but it is promising.

Oh, after a total of 12 hours in a 60C bath, the kamote still wasn't done and since I had been promising my aunt she'd have some to eat, it was time to cut open the bag and boil the suckers. Maybe 60C just isn't enough for starchy stuff.

Maybe I need to get that sous vide book...
Posted by onocoffee at 10:32 PM 2 comments: Links to this post