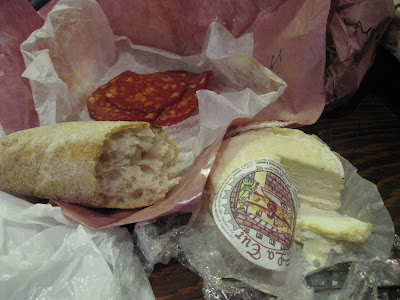 Midday meal for the hungry emcee.

When you're stuck in a hall all day long, speaking incessantly into a microphone trying to entertain hundreds (okay, maybe just seven) of people, you get a bit hungry. And what better way to stave off that hunger than by bringing along a bag lunch of goodies from Choux Choux Charcuterie and Fol Epi?

Whatever the case, I'm waiting. And it doesn't matter that they're there, I'm standing there, or that it's ten minutes past their opening time. They're French. I'm not. They're unhappy they're not in France and, therefore, I must suffer and wait.

Meanwhile, I spot a meter maid starting to write me a ticket and quickly deposit money into the meter. She's unhappy (maybe she too is French) and challenges me if I only put money in the meter because I saw her coming - what am I going to tell her? The truth??? Silly Lapin, parking tickets are for kids (and suckers who say "yes" to that question). Needless to say, she wasn't too happy with the answer.

Finally, after a bottle of wine and four cigarettes, the ladies of Choux Choux decide that I've paid my penance and they allow me into their hallowed halls.

Now, I may poke fun at them, but their charcuterie looks very serious. There's a third of a saucisson sec remaining in the case and I take it all. Just give me the hunk and another entire link. What's that? That's it? No more saucisson??? Sacrebleu! Well, how about a recommendation? Csabai? Okay, 100 grams of that, a round of La Tur cheese, some dijon and a nice slice of pate maison.

Add to that a fresh baguette from Fol Epi and suddenly you've got a meal for champions to fuel your day!
Posted by onocoffee at 7:09 PM No comments: Links to this post