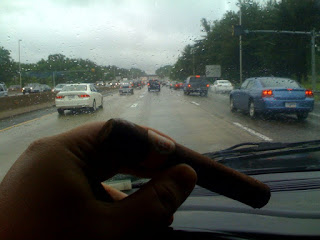 Posted by onocoffee at 3:43 PM No comments: 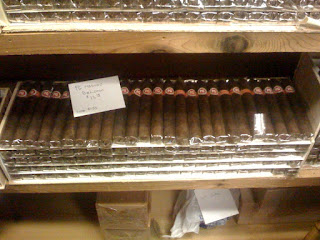 Posted by onocoffee at 3:06 PM No comments: 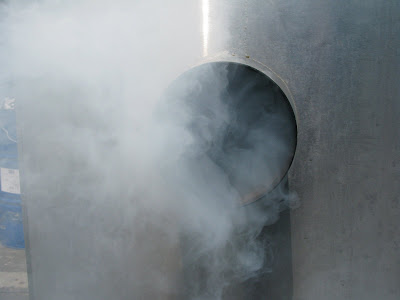 Back in 1995, old friend Sam and I partnered together to make a little barbeque shack called "The Ono Grill." It was a fun experiment that only lasted the summer and showed us just how viable our barbeque ideas were. Our barbeque was a mixture of Southern and Hawaiian traditions, with lots of Sam's personal BBQ experience thrown in for good measure.

Take our pulled pork recipe, for example. To prepare the pork, we followed traditional Hawaiian techniques for Kalua Pig, but when it came time to serve, we mixed it with Sam's pork sauce. Tangy, sweet, hot and just delicious.

I didn't know much about barbecue back then to really understand the context of what we were doing. To me, it was just delicious. I had no idea how it compared, until I started tasting BBQ during my travels. What I found was that our style was different and unique while still maintaining a respectful connection to the traditions. The flavors were tasty but not too far out there. Today I wish we had been able to maintain our project because I would like to see how our product compared to others. 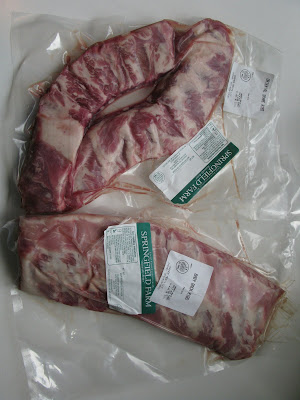 Nowadays, barbeque is limited to the couple times a year that I decide to make it and pull out the smoker. I've got a Fast Eddies FC100 pellet smoker. It's a great smoker that's easy to use and very versatile. We ended up with two at the Ono Grill and each of us got one after the project was over. It's now my "secret weapon" when it comes time to smoke.

Over at Springfield Farm, I spotted several packs of something labeled "Oriental Ribs." They're different than the traditional baby backs (and cheaper too), so I bought a few packs of Oriental ribs and a rack of baby backs as the control.

The rub I use is a relatively simple one featuring sugar, salt, cumin and a variety of other spices (yes, it's a secret - this is barbeque afterall). Pat dry the ribs with a paper towel then liberally apply rub until the entire rack is coated and shake off excess. I make sure that no meat is left uncovered by rub and then I refrigerate the ribs for two days. While I like to let the flavors meld during this time, good results can be found if you had to cook right away. 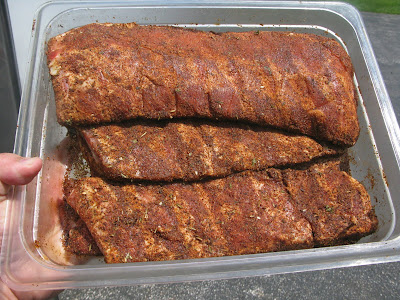 Two days later, it's time to cook. Simply fire up the smoker and set to 225F to 250F. The nice thing about the Fast Eddy is that I can simply dial in the desired temperature and the Traeger feeding system does the rest and holds it in that temperature range indefinitely. If you're doing this with fire, wood and an offset box, it's going to take a little more effort.

I'll cook the ribs for at least four hours. 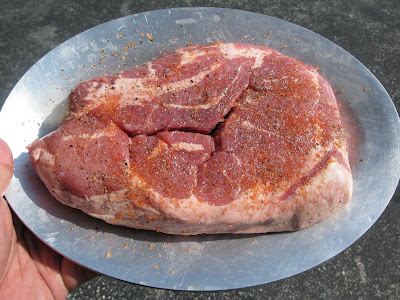 Big slice of pork butt seasoned with Alae'a salt and ready to go.

It's Sunday, and I've got a motherlode of meat sitting in the refrigerator waiting to be eaten. I've been so busy this week that I've been putting off my cooking tests and now they're piling up on me. Better to cook everything off, vac pack it and eat them all week than letting them rot.

There's a big hunk of pork butt left over from the Mother's Day Tocino and while there's not enough time to cook the butt to the point that it strings out, I'm thinking we can get a nice smoked roast out of it. Liberally season with Alae'a salt and into the smoker it goes for three hours. 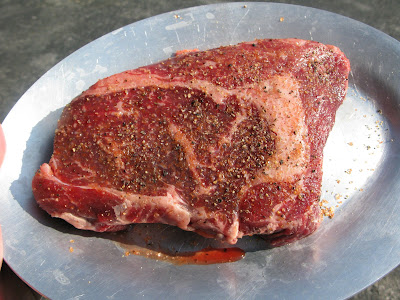 One look at that crown meat and you'll know why I selected this cut.

An hour later and it's time to toss in the ribeye I've been saving. While at the farm, I noticed this cut amongst the many. My favorite cut of beef is the ribeye, specifically the crown cap of the ribeye. It's full of fat, which means it has the most flavor and is the most tender and juicy piece. I love it and when I saw how big this cap was, I couldn't resist.

The dilemma was whether to grill it, pan fry it or toss it in the smoker. It's been a long time since I smoked a steak and figured what the heck? I didn't want all the grease from pan frying and I wasn't in the mood to fire up the charcoal grill. Into the smoker it went for the last hour of the smoke, 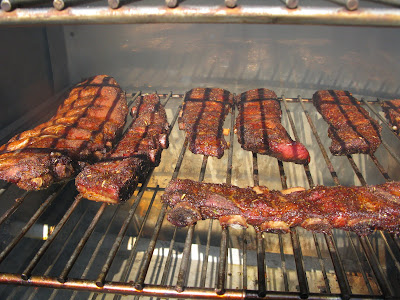 For the pork butt, I knew that with the size of cut I was using, it would be cooked through in just over an hour. I was hoping that the muscle would break down in those three hours. I was playing a small gamble but also knew that even if it wasn't enough time that the flavor would be quite nice indeed.

When it comes to smoking a steak, pretty much any steak will be done in one hour. And if you've never seen a smoked steak, it looks like nothing you've ever seen. Just a whole different animal. 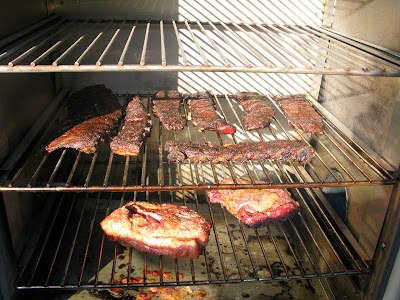 I gotta say, I find the whole smoking thing to be quite enjoyable. It's certainly not fast but it is relatively easy - especially when you have a smoker like mine. Just set it and forget it. While the meat cooks, I can enjoy a four hour 24 marathon with Jack Bauer and not have to get up except to refill my champagne. Even if you're sitting by the smoker tending to a fire, it's a highly enjoyable time and a great way to bond with friends.

Plus, there's something so ethereal, so "manly" about smoking meat. Whether you're digging a ditch for a Hawaiian imu or building fire for an Argentinean style Cruz, there's nothing like fire, smoke and booze to keep you going. 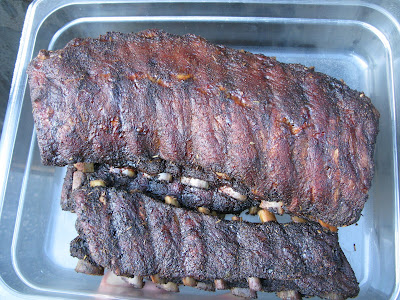 A look at the ribs.

By the end of the cook, the oriental ribs had carmelized to a dark brown, the baby back had a beautiful brownish red crust, and the pork and steak had ribbons on fat mixed with that reddish smoke color you see on meats. Lovely.

When you cut into smoked meat, you want to see a nice smoke ring. It's that ribbon of red along the edges of the meat and should be most evident when you cut into the meat. See that red ring of smoke and you know life ahead is going to be good by the spoonful. That's presuming you actually maintain enough civility to use utensils. I don't. 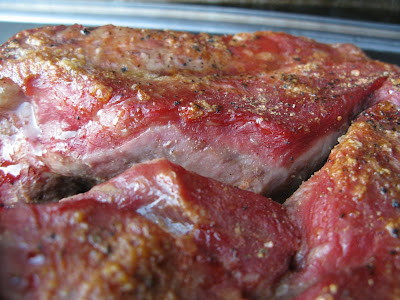 Smoke ring on the pork butt.

One thing I did find myself short on was barbecue sauce. I thought I still had some in the fridge but realized I had none. Rather than take the time to make a new batch, I dug through the pantry until I found a bottle of NOH Hawaiian sauce that I had received as a product sample.

No time to wait, time to grind. Poured out the sauce and it wasn't bad - just a bit too sweet and not pungent enough for my tastes. I prefer a bbq sauce that's a bit tangy and slightly sweet. The NOH was very sweet and lightly tangy. Next time, I'll remember to make a batch of sauce ahead of time. 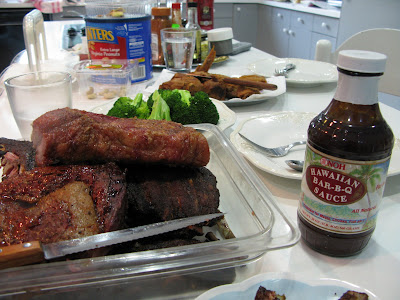 Ready to get down with some fried chicken and steamed broccoli.
Posted by onocoffee at 12:34 PM No comments: