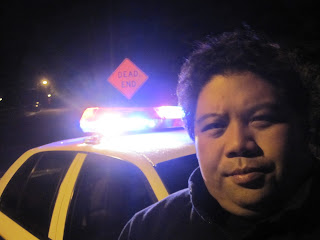 The kids hiding in the woods must have been thinking: "Look at these two crazy fucks," as they watched us standing by the patrol car, lighting big cigars as blue smoke billowed around us.

We're standing in the wooded parking lot behind Towson High School after a series of calls from neighbors complaining about kids running amok egging things and making noise - a relatively benign call in this not-too-quiet suburban township. "We're gonna get egged," Scott assures me as we enter the woods, flashlights in hand, seeking out this group of miscreants disguised as high school students.

A few minutes later, a student emerges from the darkness covered in egg juice. He's winded, disheveled and tells us that he was jumped by some upper classmen who stole his money. "Are you saying they robbed you?" we ask - a definition that would change the situation from simple civil disobedience to perhaps a felony. "Or did you drop your money and they took it?" Turns out it was more of the latter and we tell the kid to get out of here and go home.

Just then, another group of students are running towards us, this time with cartons of eggs in hand. I wonder to myself, are these kids just dumb? Drop the eggs, you morons.

We instruct the kids to come forward in the middle of woods. It's been raining lately so the ground is damp and I'm in no mood to run and chase after anyone tonight. As we spot hesitation in their eyes, I can't help but to yell at them: "If you make my fat ass chase after you, someone is getting arrested!" Thinking the better of it, they quickly comply.

Eggs are everywhere. Broken shells, runny yolks, plastic bags, empty cartons and even whole eggs are littered around the campus. To be honest, it's all quite humorous and non-destructive. We laugh about it because it's not too different than the stupid stuff we did at that age.

In the distance, we hear light thumps coming from the direction of the patrol car. "Yup, they're egging our car," Scott says as we push forward through the woods, cigar smoke billowing, looking for any other stragglers.

When we return to the car, two other units have pulled up. It's a quiet night in the city so this is an interesting diversion. Perhaps we should call in air support. As we inspect the car, it's covered in eggs. Good thing we rolled up the windows. 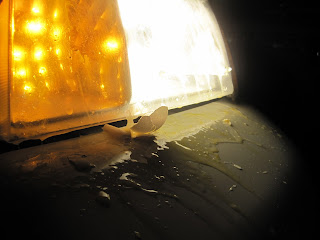 The perils of life on the streets.

Back on the street, we find a Toyota Prius slowly cruising the neighborhood. We tail her for awhile and it's a mom looking for her child. Evidently, one of the kids hiding in the woods hoping we won't arrest her. Another group of kids, also sweaty and covered in eggs, emerges from a house with their mom as we sit in the neighborhood. The mom assures us that these kids have been in the house the entire night. Sure, mom. Just get everyone home.

The view of the world is interesting and different from this side of the windshield. While we want to act stern and cross, it's nearly impossible because the whole scenario is just comical. A bunch of kids in the woods egging each other. They're not causing mass destruction. They're not assaulting anyone. They're just out being mischievous and it's difficult to get upset about that - even though they egged the car.

In the end, it's a simple rinse with the hose at the station. The kids tonight are lucky. No one got hurt. No one got arrested. Had it been the other officer watching us rinse off the car, he would have arrested them.
Posted by onocoffee at 11:42 PM No comments: Links to this post