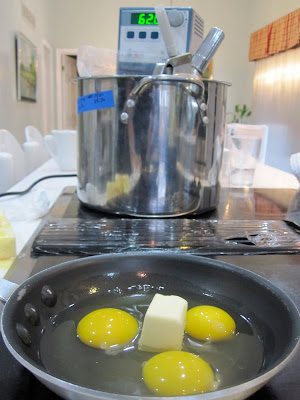 The sous vide versus the pan stirred.

A bit of time ago, I attempted to recreate Alex and Aki's Scrambled Eggs and met with disaster. After some coaching from Alex and a water bath running a 48 hour short rib run, I decided to try the egg thing once more.

This time I decided to forgo the problem of the eggs solidifying in the ISI Whip Charger and just vac bagged the mixture of eggs, butter and sour cream. This way, if the eggs solidified, I wouldn't have such a task cleaning out the whip charger - just toss the bag and it would be done. 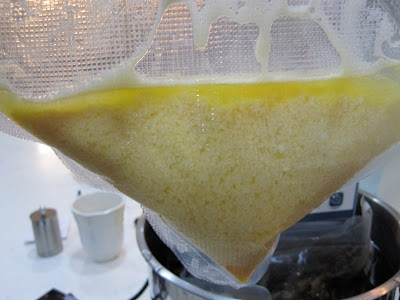 62C not looking too promising.

After an hour of cooking in 62C water, the eggs were not looking too promising. They seemed cooked but the texture looked like coagulated broken milk in coffee. To say that it didn't look appetizing would be an overstatement and the thought of salmonella or some kind of other food poisoning due to improper handling came to mind.

But since I'm an intrepid kind of chap, who's too foolish to heed his own cautions about food poisoning, I thought I would still give it a try. Afterall, I spent the past hour waiting for this thing to cook. 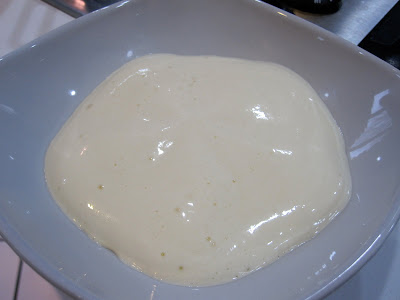 Scrambled Egg Foam - not quite the result I was looking for.

I should note here that under other circumstances, like me giving you advice on the preparation of this dish, I would tell you to quickly throw the bagged eggs in the trash and start again with a different approach. Under no circumstances would I ever recommend to anyone that they attempt to consume this potentially hazardous/lethal product.

But it was breakfast time and I was a bit on the hungry side, so full speed ahead as I toast to Living Fast and Dying Young. 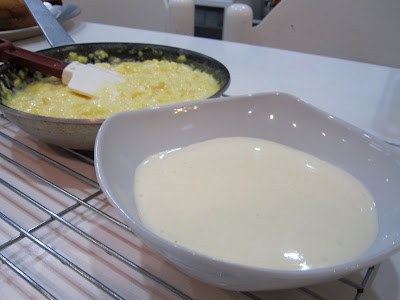 Happily, as evidenced by my writing of this post, I was not debilitated, poisoned or killed due to my reckless nonchalance with the eggs. After yet another phone call with Alex, I realized my error. Since I hadn't consulted either my own notes or the previous blog entry, I didn't realize that 62C is simply too cool to cook the eggs properly. I had just gone gonzo and winged it - which could have resulted in my being sent to the hospital. Not smart.

Since Hope Springs Eternal, I lived another day to try more of this sous vide eggery foolishness and proceeded to heed Alex's recommendations of cooking the eggs for 25 minutes at 75C. 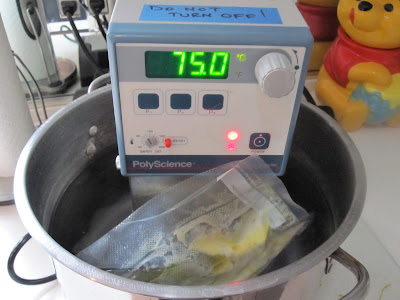 Into the bath went two eggs, two tablespoons of butter and a dollop of sour cream. Wait, wait, wait and then it was time.

Pulling the bag from the bath and already I could see something different. It looked much better than the 62C eggs but still kinda was separate from the eggs and the cream. In spots, the eggs had clotted together. This was remedied by a thorough mixing of the ingredients by mushing the bag over and over again until the mix had combined. 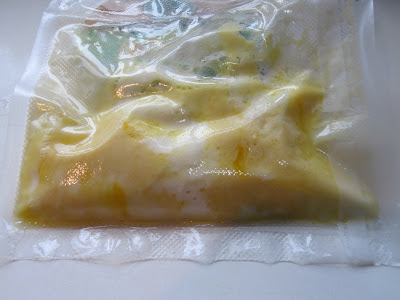 Looking promising in the bag.

From there, it was just a matter of cutting open the bag, seasoning with salt and then layering over a piece of toasted Struan bread from Atwater's Bakery. Lovely.

Perhaps a topping of dill would suffice but I'm thinking that maybe shavings of bacon instead of the slices shown below might make for a fun presentation. Imagine someone coming to the table with a hunk of bacon and shaving slices/pieces of bacon over the eggs. Fun! 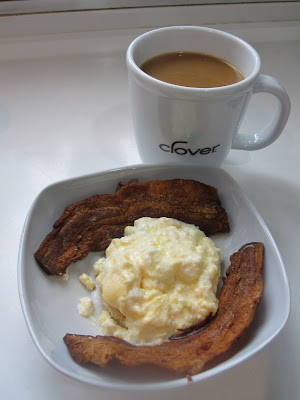 Sous Vide Scrambled Eggs on Struan bread with applewood smoked bacon, and Kenya Gaturiri from Stumptown Coffee.
Posted by onocoffee at 11:19 AM No comments: Links to this post