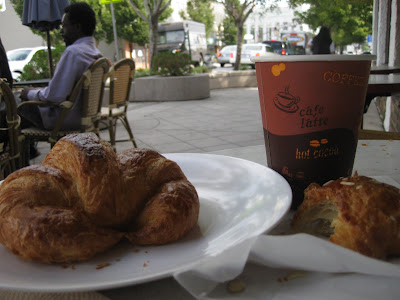 Not too far from San Francisco Airport is the neat little town of Burlingame. I just happened upon the town while trying to make my way to In-N-Out Burger last week when I was in town and stumbled upon the little Le Croissant Cafe.

Even though I lived in both Manila and Honolulu, I'm still rather shocked to see so many Asian people in California. Asian people doing the same things that people do elsewhere: live. In my neck of America, Asians are still far between and even a bit of a novelty. At least, that is, Asians who are native English speakers living American lives. Yes, that sounds mighty narrow of me, but I live in Baltimore, so go figure.

While the croissants are decent enough, they nowhere near rival those I can get in Baltimore and certainly pale to those I buy in Paris, but they are decent. The coffee is good enough that I'll drink it but nothing special and yet I felt compelled to visit a second time and will probably visit again on subsequent visits to the Bay Area while staying around SFO.

If the croissants aren't amazing and the coffee isn't stellar, just what is it that holds my interest? It's the people. The friendly couple who run the place - I presume they're either "together" or married. I find it fun that the guy prepares his sandwiches and food with straight seriousness while wearing a chefs jacket and the woman handles the orders and prepares the beverages. There's a romanticism to Le Croissant Cafe that I imagine I might have taken if my life had gone in a different direction. Man and woman. Mom and Pop. On the quintessential American Main Street. Just Lovely.

In fact, I imagined that if my brother Al and Polly started their own little cafe that this is what it would be like, complete with little nieces and nephews running around.

I wish I could be a regular there.