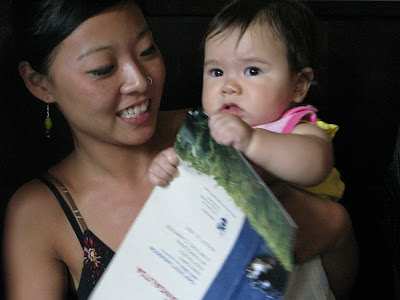 For the past two years or so, I've been following the Wooly Pigs Blog, the repository for all things Mangalitsa in the United States. Widely known for its' famous fat content, the Mangalitsa is a Hungarian breed of pig that has a lot of hair in addition to it's tasty fat and succulent meat. In the United States, there are something like 1,000 Mangalitsas and 60,000 worldwide (with 50,000 of them still in Hungary).

The problem is that the Mangalitsa is non-existent in the Mid-Atlantic, so I've spent the past two years merely reading about the wooly pig instead of eating them. Until now.

Happily, an intrepid farmer in Sussex County, New Jersey has taken on the raising of the Mangalitsa and when Alex and Aki announced on their Ideas In Food website that they were partnering with Scott Anderson to produce a multi-course Mangalitsa tasting dinner, I was immediately on the phone with Beth at Elements Restaurant in Princeton to secure myself a table.

Whatever the cost, whatever the distance, if the Mangalitsa was on the menu, I was going to be there. Last Monday, Spike, Isaiah, Allie and myself drove up to Princeton to see what all the fuss was about.

This time, I'm not going to go into too much verbage about the evening. Just know that the air conditioning wasn't running at optimal power, we were hot, the bathrooms' air was ice cold, cocktails were flowing and the Mangalitsa was hot, hot, hot. Some of the highlights of the evening were the headcheese, the uni, the lardo, the fat and the bacon & eggs dessert. Just an amazing dinner that you'll see below. 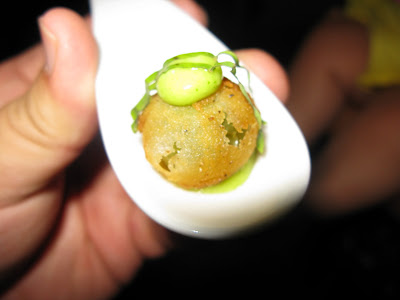 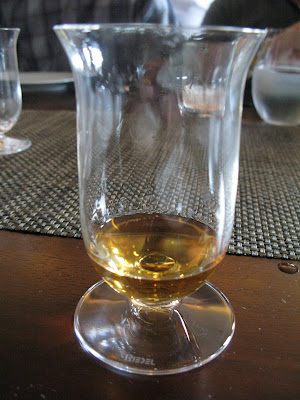 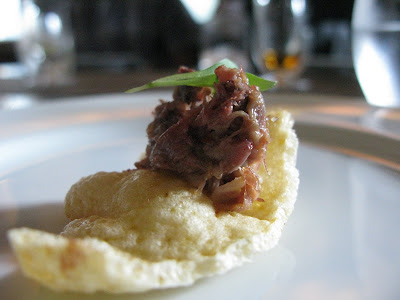 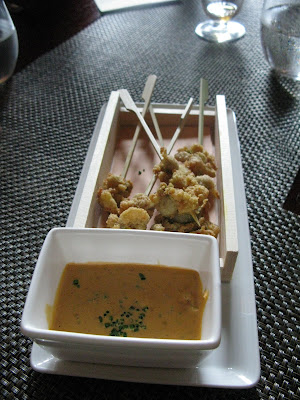 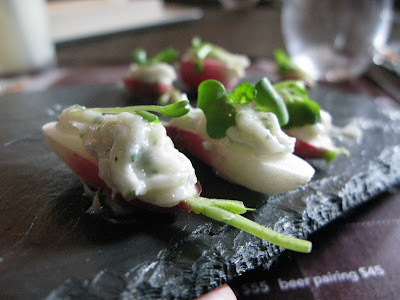 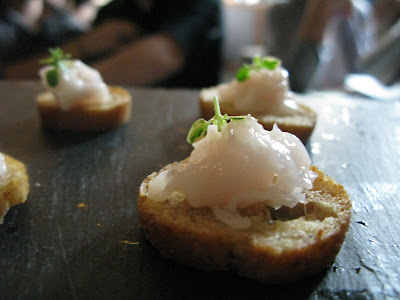 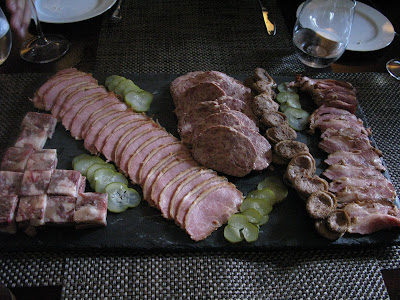 A Charcuterie Wet Dream: succulent headcheese, cured ham, pate, sausage and a pastrami-like preparation with pickles, mustard and breads. Served family style, everyone tore into this offering and were suddenly hit with the realization that there was still an evening of eating ahead of us. Some of us might not make it. 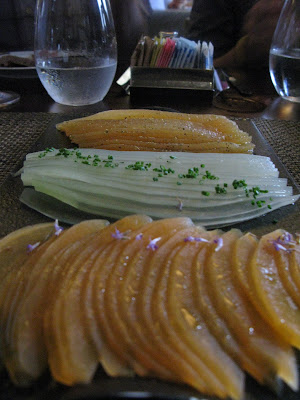 Sliced Melon for the Charcuterie. 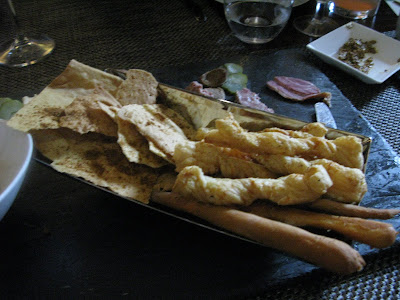 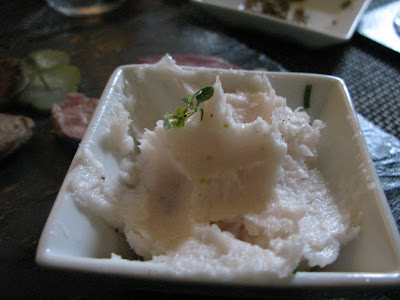 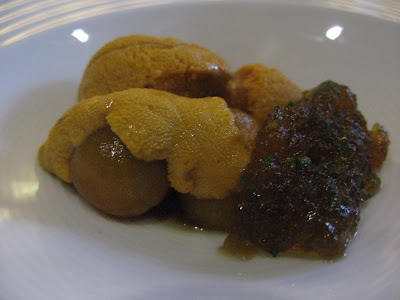 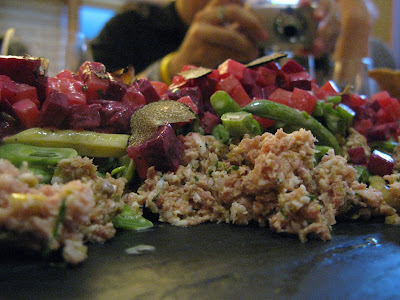 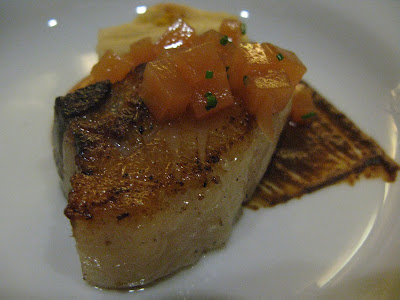 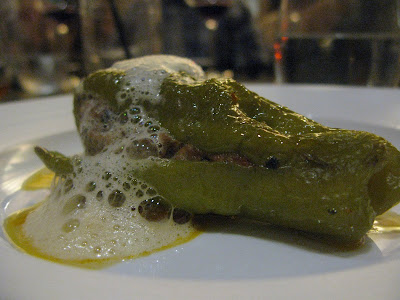 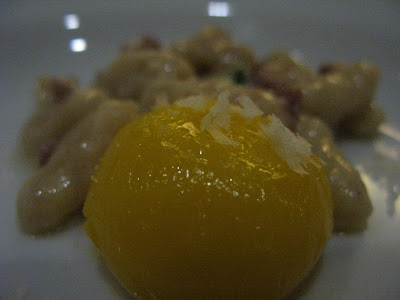 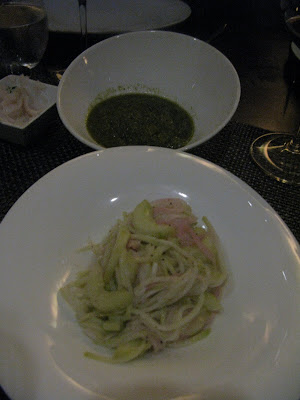 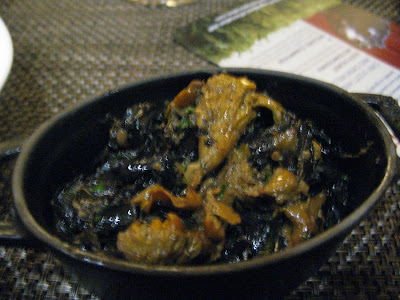 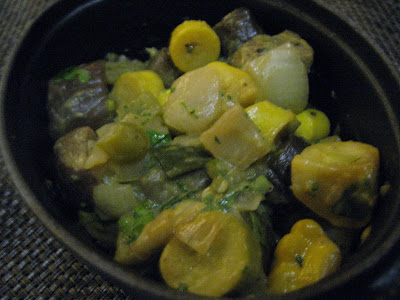 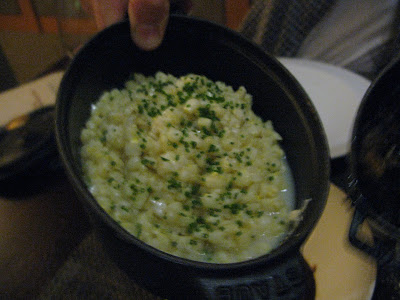 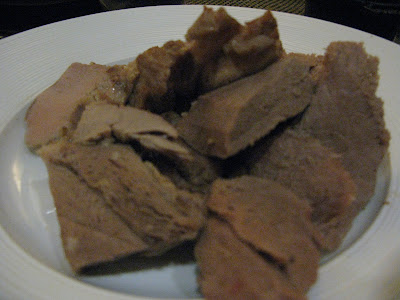 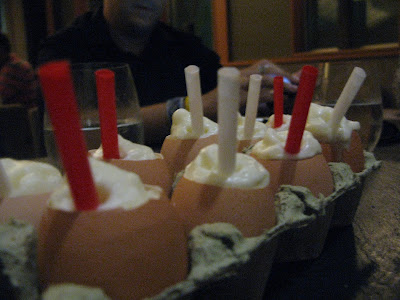 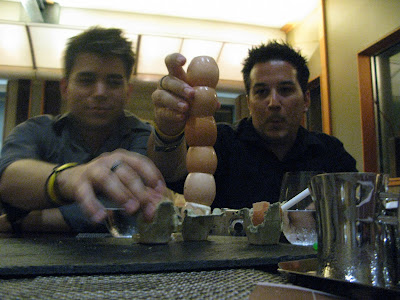 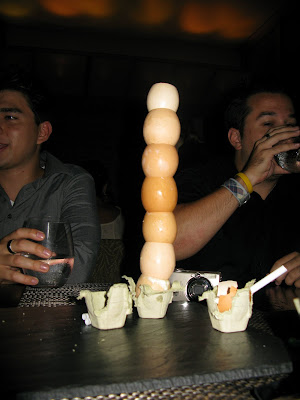 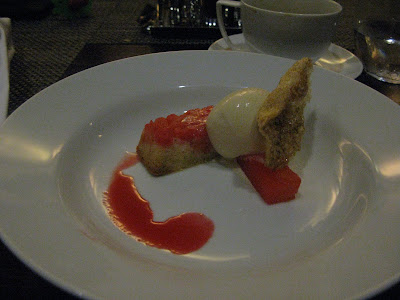 Honey Glazed Ham Ice Cream with compressed pineapple topped with maraschino cherry juice and a sugar glazed crackling. This dessert was way out there - and I mean waaaay out there. I liked it because it really pushed the limits of what we think dessert is all about. Extreme. While I liked the idea of pushing the limits, the flavors were beyond my own limits. While I'm excited by the execution and sheer audacity and daring of the dessert, it's not one that I would choose to order. But I did love being able to taste it and be challenged by the flavors.

My father is first generation to the United States from Hungary. Pork was always a big part of his family's diet. When you showed the picture of the "fat on toast" it made me giggle because one of my father's favorite treats is szalona. Szalona is a seasoned, smoked piece of fat that they would roast over a fire and drip on pieces of bread topped with chopped vegetables. Smoked fat on toast, just served a different way.